The Beast of Dean - The Moose-pig

In the year 1802, the people of Parkend in the Forest of Dean were disturbed by strange beastly sounds in the forest.
The beast itself was discovered to be a giant wild boar. It was of such enormous proportions that it felled trees, damaged hedges, and flattened fences. The villagers organised a hunt to capture or kill the animal, but their endeavours came to nothing.
Many years later, in 1998, two people living locally reported seeing a creature the size of a cow, but with the appearance of a boar.
Later, in 2005, an early morning sighting was made between Pygmy Pinetum and Mireystock crossroads. The report described the beast as a ©big black animal©. Another recent witness spoke of a wild pig as big as a horse.
At some point the animal became known locally as the "moose-pig", elsewhere as the Beast of Dean.
Until its more recent reintroduction the wild boar had been extinct in the British Isles for many centuries, possibly since the 13th century.
In the 11th century story of Culhwch and Olwen, there is a section about a magical boar named Twrch Trwyth that is hunted across South Wales, and into the Forest of Dean from where it escaped by jumping into the River Severn.

Posted by Clive Barrett at 14:53 No comments:

Tolkien in the Forest of Dean

The Ancient Lydney Temple dedicated to the gods Nuada (Nodens) and Sylvanus
J.R.R. Tolkien visited the Lydney Pagan Temple in the 1920s and was fascinated by what he discovered. He spent much of his spare time exploring the landscape and delving into its rich folklore.
Overlooking the Lydney Park Estate are two hills, one crowned by the broken walls of a medieval castle, the other with the extensive remains of a Romano-British temple.
Much of what Tolkien saw and heard here influenced his later writings - The Hobbit and The Lord of the Rings.
The nearby“scowles”, areas of rough rock strewn passageways, mossy and overgrown with twisted trees look like the forests of Middle Earth. From the introduction to the first edition of the Norse Tarot

Life is the search for that which is lost, for we each have within us our own personal quest. What we seek may be unknown to us, but still we strive onwards. Our aims, allthough we are not consciously aware of them, have a great effect on our lives, governing the way we think and the actions we take. Each of them personal, individual, and indefinable. The difficulty in expressing, and explaining the search has resulted in the generation of much of the mythology of the past, producing many varied, and diverse retelling of what is basically the same story. Over and over again, it is repeated throughout history. The theme, beneath its constantly changing trappings, always remains the same. Each an attempt by an individual, or a group, to describe the indescribable quest, each a reflection, and only a reflection, of the urge to know the unknowable.

We are all looking for something that we cannot explain; perhaps we are not even aware that there is anything lost, but still we go on, searching blindly.

The goal has been variously described as the Philosophers Stone, Immortality, Oneness with Nature, Perfection, the Truth and the Grail. The search is looked on as the Great Work, the Way, the Path to Righteousness. All philosophers seek the same end - only the terminologies are different. This difference in terminology leads to misunderstanding between the varying belief systems, which is most regrettable as each is driven by the same internal force.

The pattern of the search is cyclic. One starts at the beginning, and progresses, only to return to the point of origin.

It is the cycle seen in the sun, progressing through the hours of the day and the seasons of the year. The sun rises in the morning, growing steadily towards midday and the time of its greatest strength, then moves on to its glorious ending at sunset, where it will rest through the night. Through the seasons, the sun follows its course from winter to summer, and back to winter again. It is the cycle of the moon as it passes through the month, waxing and waning, new moon to old moon.

The search is illustrated perfectly in the Major Arcana a of the Tarot - the Fool begins his adventure with no knowledge of what is to come. In human form he is the very essence of inexperience. Moving through the cards he gains knowledge and wisdom, understanding and compassion; he experiences the heights of joy, and the depths of despair. Ultimately he sheds his earthly pleasures, and attributes to reach perfection, and completion.

But just what does he achieve. Not only his method, but also his final achievement is veiled in mystery, open to a mixed, and varied interpretation.

The idea of making a carved leather clock had been in the back of my mind for some time. I'd thought about it often, but could never decide on the right sort of design. I knew it had to look right, not be just any picture made into a clock.

One day I was working on a picture of a Rumpelstiltskin type character, tangled up in his own beard but delightfully oblivious to any concerns. The picture began in a square format, but I realised that it would make and interesting circular design. It was then only a small step to think of making it into a clock. 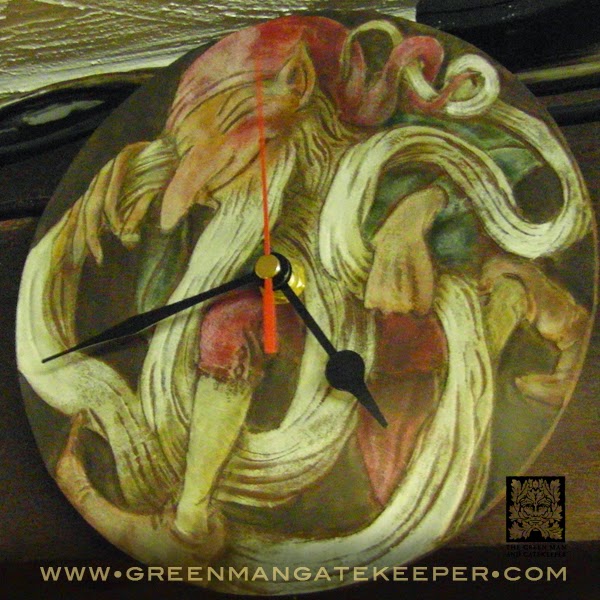 I started the first clock face on Christmas Day, and had it finished it before New Years Eve. Soon I realised that I should have included numerals around the outside, so a second version was made. 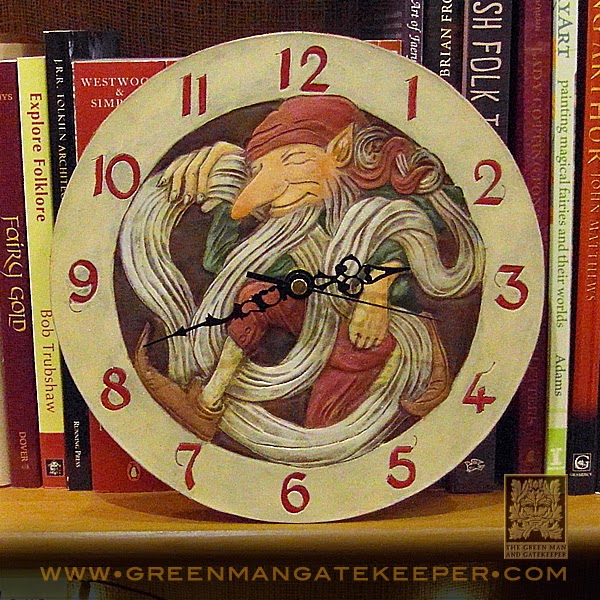 This worked better, I could actually tell the time with this one, which is always an advantage when it comes to clocks.

Then it was suggested that the Tinner's Hare would make a good clock face. I'd carved this design on bags and journal covers in the past, so it was no problem to make it into a clock face. This one is coloured with leather dyes rather than with paint.

"Leather clock" rhymes with "Weathercock", an amusing thought which prompted me to make this one, showing a cockerel heralding the rising sun with a golden trumpet.


Now, when all is still and quiet, the shop is filled with comforting sound of gentle ticking.
Posted by Clive Barrett at 13:19 No comments:

Green Man and Gatekeeper is an odd little shop nestled between the Forest of Dean, and the River Severn.

Much of what we have on our shelves we make ourselves, leather bags, masks, pewter jewellery and figures, ceramic plaques and sculptures, and also greetings cards based on our paintings. The remainder is carefully chosen to compliment the things we make.


Some visitors have mistaken the shop for museum, others tell us that it's like one of those small shops that can be found near the entrances of museums. Perhaps it is something of both, a little museum where everything in the display cabinets is there to be seen, and perhaps bought, by anyone who is interested.

A museum houses objects that are unusual, interesting, and sometimes surprising. That is how we aim to fill the shelves.

We are guided, and inspired by our interest in the history, myths, and traditions of the land around us. We have ideas of what we'd like to see in the shop, and we try to bring it into reality. Sometimes this takes time, it may mean learning new techniques, or how to work with different materials.
It's a small shop, we can't make everything here, but we do make all our leather items on the premisses and find that visitors are interested in seeing how it's done.

Posted by Clive Barrett at 01:45 No comments: More about the Norse Tarot